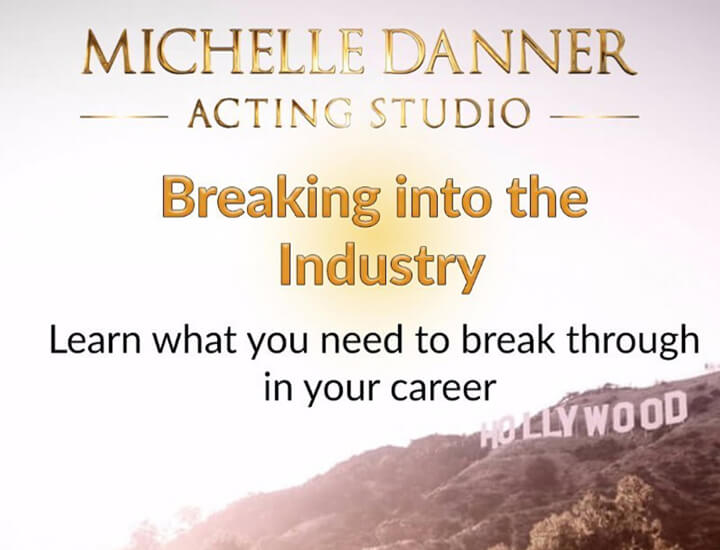 Our Hollywood Acting Workshop “Breaking into Hollywood” will prepare you with the tools required to break through in Hollywood. It can take years for an actor to learn the ins and outs, and the do’s and don’ts of the industry.
.
Actors fly in from all over the country to attend this class.
.
Michelle Danner uses her years of experience within the business as a director, teacher, and actress to give actors a head start, and bypass years of trial and error.
Our Hollywood Acting Workshop “Breaking into Hollywood” is for actors who need an agent, who are trying to get to the next level, who are unsatisfied with the amount of auditions they are getting, and who have an agent but need to book work.
.
5 REASONS YOU NEED TO COME TO BREAKING INTO HOLLYWOOD WORKSHOP
Just moved to L.A.Just starting your Acting Career
Been Acting for a short/long time.
Don’t have an Agent.
Have an Agent. Not getting auditions.
Have an Agent. Getting auditions but not booking.
An Interactive Workshop That Answers Your Questions
How to get a headshot and show reel that stands out!
Getting into SAG-AFTRA!
How to create a resume that gets you called in!
Finding agents, managers, lawyers, and publicists!
Getting work without an Agent!
How casting works!
How to develop an individualized strategy for your career!!!

“I wanted to let you know how much I enjoyed Michelle Danner’s workshop on Sunday.  I liked that she brought in different headshots to show the difference between a good and a bad headshot, and she did a great job of explaining what to look for in a headshot when looking at the work of different photographers.  She also spent time talking about scams; how to spot them and how to avoid them.  In addition, her advice on how to submit to agents, when to sign with one, and when to go union was invaluable.  I would highly recommend this class to anyone looking to begin expanding their acting training into an acting career. I just wanted to say that I would definitely recommend The Acting Studio at Edgemar Center for the Arts led by renowned acting coach Michelle Danner to anyone, and thanks for a great experience!”
.
THE MICHELLE DANNER ACTING STUDIO, ONE OF THE BEST PERFORMING ARTS SCHOOLS IN THE US
ADDRESS : 2437 MAIN ST. SANTA MONICA CA
TO LEARN ABOUT ALL THE ACTING CLASSES LOS ANGELES WE OFFER CALL 310.392.0815
ONE OF THE BEST DRAMA SCHOOLS EMAIL ADDRESS:
ACTINGCLASS@MICHELLEDANNER.COM

The Michelle Danner Acting Studio’s philosophy is that artists can draw upon all different acting techniques and form an individual toolbox, their own Golden Box. We will help you to develop your own “Golden Box” of techniques and tools that you can use when approaching a role or a scene, whether it be for film, television, or theater. The Acting School’s acting techniques are based on Meisner, Strasberg, Adler, Hagen, Chekhov & the Stanislavsky Technique.

She’s also directed Hello Herman, starring Norman Reedus from the Walking Dead. The film opened nationwide with simultaneous availability on VOD in 100 million homes and premiered at the Hollywood Film Festival and won the award for Socially Relevant Film at the Monaco Charity Film Festival. Her production company, All in Films, produced her latest film The Bandit Hound which was released in 2016 and is in development for several upcoming projects: The Bandit Hound 2, and The Will To.

What is our teaching technique?

We provide a safe and pro-active environment that fosters creativity in our students. You will be encouraged to take risks and work on challenging and daring material that will stretch you as an actor, and push you beyond your limits.
Our classes are small so that each student has the opportunity to work in every class. We ensure that each student receives the care and attention necessary to grow as an actor.

Where have our faculty trained?

You will be taught by one of the most-well respected and in demand acting coaches in Hollywood. Michelle Danner has worked for years privately, and on set with some of Hollywood’s biggest stars. Our faculty of acting teachers have graduated from some of the most prestigious programs in the world, including Yale and Julliard, and they are currently working as actors, and directors.

What opportunities are there for actors?

The Michelle Danner Acting Studio not only provides world class training, but you will have the opportunity to build your resume and gain IMDB credits. You will also have the opportunity to audition for parts in Michelle Danner’s latest movies, audition for the various theater productions, and participate in our yearly film festival. These opportunities give students the chance to build their resumes and IMDB credits, through practical training.

Below are links to the websites you should check out for more information:
All In Films is an independent film production company. At the helm are Michelle Danner. The mission of All In Films is to produce high-quality, independent movies geared to entertain & spark social commentary.
Check out the website at www.allinfilms.com.

**Through the improvisational classes you will have the opportunity to be part of the latest Web Series “Uncensored Hollywood.”

Acting Auditions for teen and Kids