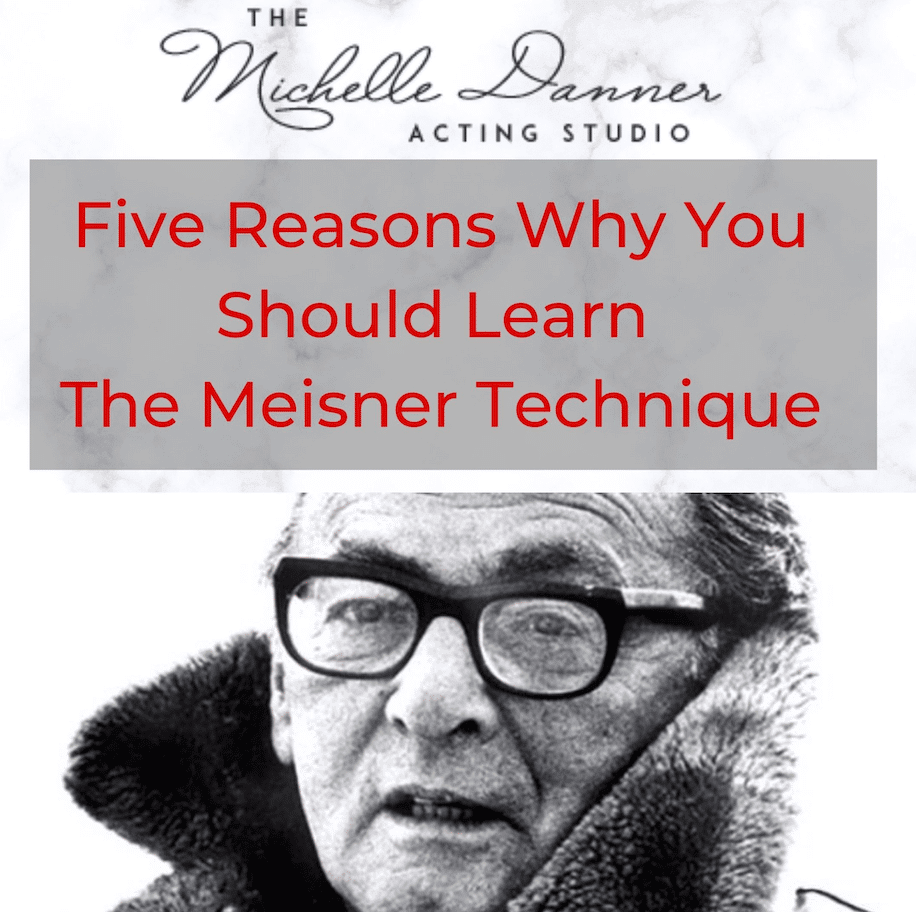 Five Reasons Why You Should Learn the Meisner Technique

I will first list the five reasons and then elaborate.

A fundamental tenant of the Meisner technique is that rather than focusing on yourself, often judging yourself and thus hindering your performance, you focus on the other actor. The more acutely you are cued in to the other actor, the more subtlety you will notice and the more nuanced your reactions will become.

As any actor worth his salt will tell you that acting is essentially reacting, you can imagine how crucial this would be for a riveting performance. By reacting in the moment, your acting will be compelling because what you’re doing is real and unpredictable, leaving the audience wanting more. It will also reduce your performance anxiety, because by focusing on the other actor you take the pressure off yourself. Of course, this is easier said than done. For this reason, the Meisner Technique features a series of exercises that build on each other to train you in these crucial skills.

As you get more proficient, you will learn to apply the Meisner Technique to scenes. As to your life, as you can picture, being a better listener will profoundly improve it. From family, to friends, to significant others, everybody loves a good listener. Also, as in acting, you’ll have less anxiety because the same principle applies: Focus on the other person and you’ll take the pressure that causes anxiety off ourself. Further, you will notice subtleties in communication that used to slip you by, maybe allowing you to capture an opportunity you may have missed otherwise or to spot a lie. In Hollywood, where opportunities come and go within the blink of an eye and many people are not exactly beacons of truth, this is obviously a significant advantage.

As you can see, through the Meisner Technique both your acting and your life will transform and this will create a positive feedback loop reinforcing the benefits of each. You can reach our acting school in Los Angeles at (310) 392-0815. Let us know if you have any questions about in-person classes in Los Angeles or online course please email us at actingclass@michelledanner.com To sign up for acting classes and to meet with acting coachMichelle Danner in person at her Los Angeles Acting School please RSVP for the free informational session in the contact form on the left.  ACTING SCHOOL IN LA,

LOOKING FOR ACTING CLASSES IN LA? Learn the best acting techniques for film and TV. Book your next role. Schedule a one on one interview with Michelle Danner to be considered for enrollment and to learn about all the acting classes and acting courses we offer in Los Angeles. *Learn how to stand out in the audition room.

Call the acting school to sign up 310-392-0815 or email at actingclass@michelledanner.com Without Sanford Meisner there would be no Meisner Technique. Without Meisner Technique, most acting schools and certainly acting classes would be hard pressed to find a way of teaching a concrete way for actors to listen and spontaneously answer one another.

Everyone hears about the repetition exercise, Meisner Technique Activities, and the brilliant acting it can produce if taught by a. Acting coach who understands this acting technique at its core and has preferably studied with the legendary acting coach sanford Meisner. Who was Sanford Meisner? Sanford Meisner, along with Lee Strasberg, Robert Lewis, Elia Kazan, and Stella Adler, was one of the founding members of perhaps the most influential movements in American acting training.

Learn Acting at one of the Best Acting Schools in Los Angeles
You can reach our ACTING SCHOOL IN LA, for information about the in-person classes in Los Angeles, online course, THE MEISNER TECHNIQUE ACTING CLASS., by calling 310.392.0815 or email us at actingclass@michelledanner.com