Give yourself a competitive edge in the audition room, on stage, or in life! Sign up for our Improv Classes LA!

Improv is a great opportunity to have some fun and fuel your imagination!

Become a skilled improv actor. You will learn how to improvise game-based comedic scenes and the Long Form structure. Learn to be quick on your feet, create comedic improvised scenes and take risks with confidence.

This is an improvisational workout geared towards helping you find untapped creativity and enhance your skills as a performer. Build scenes, Take Risks, Find unique choices that are memorable, Develop strong and exciting characters, Get out of your head and open your eyes to new performance possibilities. 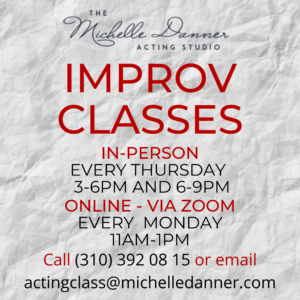 Stella Adler Technique| Meisner Acting Technique| The Stanislavski Method|Uta Hagen. Below is a list of some of our acting classes:

Learn Acting at one of the Best Acting Schools in Los Angeles.

Beginner Acting Classes are available for the dedicated actor at any stage of his or her career, teaching skills that can be applied easily, effectively and specifically.  Our performing arts school in Los Angeles trains actors to become professional working actors in theatre, film.  We offer online acting classes to prepare you for film and television acting can be taken in virtually in real time online. Our acting Classes are held in virtual classrooms hosted by zoom.  If you need an online acting coach for a skype acting coach session please call or email us. Get LIVE interaction with your online acting coach and your classmates. You can reach our acting school in Los Angeles at (310) 392-0815. Let us know if you have any questions about in person classes in Los Angeles or online course please email us at actingclass@michelledanner.com

CLICK HERE FOR ONLINE ACTING CLASSES FOR KIDS AND TEENS